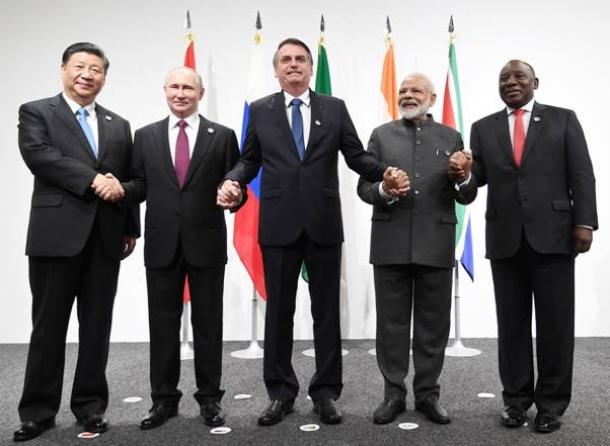 1.We, the Heads of State and Government of the Federative Republic of Brazil, the Russian Federation, the Republic of India, the People's Republic of China and the Republic of South Africa, met on 28 June 2019 on the margins of the G20 Summit in Osaka, Japan. We congratulated the G20 Japanese Presidency and expressed our gratitude for the hospitality provided.

3.The world economic growth appears to be stabilising and is generally projected to pick up moderately later this year and into 2020.However, the strengthening of growth remains highly uncertain, with rising trade and geopolitical tensions, commodity price volatility, inequality and insufficiently inclusive growth, and tighter financial conditions adding to the risk.Global imbalances remain large and persistent and require thorough monitoring and timely policy responses.We further stress the importance of a favourable global economic environment for sustained growth of international trade.

4.In this scenario, we note with satisfaction that the BRICS countries have been the main drivers of global growth over the last decade, and currently represent close to a third of global output. Projections indicate that the BRICS will continue to account for more than half of global economic growth through 2030. Continued implementation of structural reforms will enhance our growth potential.Balanced trade expansion among BRICS members will further contribute to strengthening international trade flows.

5.In helping to address challenges and to fully benefit from opportunities, we acknowledge the importance of, among others: open markets; stronger economic resilience; financial stability; well-designed and coordinated macroeconomic policies, as appropriate; structural reforms; adequate investment in human capital; reduction in poverty levels and inequality; effective competition to promote investment and innovation; open, fair, just and non-discriminatory business environments;cooperation in public-private partnerships (PPP); and infrastructure financing and development. International and domestic measures in these areas and others will contribute to sustainable and inclusive economic growth.We call for greater participation of developing countries in the global value chains. We recognise the importance of the interface between trade and the digital economy. We also affirm the role of data for development.

6.We are committed to transparent, non-discriminatory, open, free and inclusive international trade. Protectionism and unilateralism are run counter to the spirit and rules of the WTO. We reaffirm our commitment to multilateralism and international law and our full support to the rules-based multilateral trading system with the WTO at its centre. We will work constructively with all WTO Members on the necessary reform of the Organization, with a view to better addressing current and future challenges in international trade, thus enhancing its relevance and effectiveness. The reform must, inter alia, preserve the centrality, core values and fundamental principles of the WTO, and consider the interests of all members, including developing countries and LDCs. It is imperative that the WTO negotiation agenda be balanced and be discussed in an open, transparent and inclusive manner.

7.The WTO dispute settlement mechanism is an indispensable pillar of the multilateral trading system and the Appellate Body is essential for the proper and effective functioning of the Organisation. We remain committed to the preservation of a functioning two-stage binding adjudication system for disputes in the WTO. Recalling the urgency of solving the impasse in the appointment of members of the WTO Appellate Body, we urge that the Appellate Body selection process be initiated immediately.

8.We reaffirm our commitment to a strong, quota-based and adequately resourced International Monetary Fund (IMF) at the centre of the Global Financial Safety Net. We reiterate our commitment to work with the Executive Board towards the implementation of the IMF quota and governance reform on the basis of the principles agreed in 2010. We remain committed to concluding the 15th General Review of Quotas no later than the 2019 Annual Meetings.

9.We note with appreciation the role of the New Development Bank (NDB) in infrastructure financing and sustainable development and stress the need for enhanced and continued efforts to build a strong, balanced and high-quality portfolio of projects. We emphasize the importance of a focused effort to address the backlog in critical infrastructure investments in member countries.TheNDB will be strengthened by the establishment of regional offices. We welcome the NDP's commitment to mobilise resources in the domestic currencies of all its members, starting in China, as well as the upcoming bond programmes in South Africa and Russia. We look forward to the early implementation of the NDB Project Preparation Fund and expect it to become an efficient instrument for the preparation of projects, providing technical assistance to the NDB member countries.

10.We stress the continued importance of the BRICS Contingent Reserve Arrangement (CRA) as a mechanism to forestall short-term balance of payment pressures in member countries.Following the successful test run conducted in 2018, we commit to furthermore complex test runs to ensure its operational readiness to respond to a call on resources, if needed.We welcome the functioning of the CRA System of Exchange in Macroeconomic Information (SEMI). We welcome continued efforts to establish the BRICS Local Currency Bond Fund and look forward to starting its operation.We also support cooperation between the CRA and the IMF.

11.We strongly condemn terrorist attacks, including against BRICS countries, in all forms and manifestations, wherever and by whom so ever committed. We urge concerted efforts and a comprehensive approach to counterterrorism under the UN auspices on a firm international legal basis. We reiterate that it is the responsibility of all states to prevent financing of terrorist networks and of terrorist actions from their territories.We reiterate our commitment to fight the exploitation of the internet for terrorist purposes.While recognising that states have the leading role to ensure safety and security in the use of ICTs, we call on the technology companies to cooperate with governments, in accordance with applicable law, to eliminate the ability of terrorists to use digital platforms to encourage, recruit, facilitate or commit terrorist acts.

12. We remain firmly committed to fighting corruption and will continue to foster integrity in the public and private sectors. We will, therefore, strive to promote international anti-corruption cooperation and strengthening of legal frameworks, as appropriate, to more effectively address cases of corruption especially with regard to assets recovery. We will seek to enhance our mutual efforts in the prosecution of persons sought for corruption. We recognise the role of whistle-blowers[1]in preventing and combating corruption in both the public and private sectors and the need to improve measures to protect whistle-blowers.

13. We acknowledge that corruption, including illicit money and financial flows, and ill-gotten wealth stashed in foreign jurisdictions, is a global challenge which may impact negatively on economic growth and sustainable development. We will strive to coordinate our approach and encourage a stronger global commitment in this regard. We also recognise the need to strengthen cooperation, subject to domestic legal systems, in anti-corruption law enforcement, extradition of fugitives, economic and corruption offenders, and in recovering stolen assets. We reaffirm our commitment to support international cooperation in combating illicit financial flows, including cooperation within the Financial Actions Task Force (FATF), the World Customs Organisation and other relevant multilateral mechanisms.

14. We recognise the crucial role of cooperation in transitioning towards cleaner, more flexible energy efficient systems that combine growth with decreasing greenhouse gas emissions while ensuring energy security, access to energy, sustainability and affordability. We acknowledge the importance of varied sources of energy and technological advances to achieve a low emission future, such as solar energy, sustainable bioenergy and natural gas in transportation. In this regard, we acknowledge efforts by BRICS countries in promoting international cooperation on renewable energy resources and reiterate our commitment to strengthen the BRICS Energy Research Cooperation Platform, aiming at facilitating joint studies on sustainable energy and sharing advanced energy technologies.

15. We remain committed to the full implementation of the Paris Agreement, adopted under the principles of the UNFCCC, including the principles of common but differentiated responsibilities and respective capabilities, in the light of different national circumstances. We urge developed countries to provide financial, technological and capacity-building support to developing countries to enhance their capability in mitigation and adaptation. We look forward to the UN Climate Action Summit to be held in September this year to produce positive outcomes.

16. Recalling the 2030 Agenda for Sustainable Development, we reaffirm our strong commitment to sustainable development. We stress the importance of fully honouring official development assistance commitments and the provision of development resources, in accordance with the Addis Ababa Action Agenda. We continue to support the G20 Action Plan on the 2030 Agenda, the G20 Initiative on Supporting Industrialisation in Africa and Least Developed Countries and the G20 Africa Partnership, including the Compact with Africa.

17. We commend Brazil for identifying Economic Growth for an Innovative Future as the theme of the 2019 Chairship. Recognising that innovation is a key driving force behind development, we reaffirm our commitment to maximise the benefits of digitalisation and emerging technologies, including for the population of rural and remote areas. We encourage joint efforts to share good practices on internet-driven poverty alleviation and the digital transformation of the industrial sector. We stress the importance of continuing BRICS scientific, technical, innovation and entrepreneurship cooperation, including the BRICS Partnership on New Industrial Revolution (PartNIR), iBRICS Network, the BRICS Institute of Future Networks, and Young Scientists Forum.

18. We express our support to the Brazilian BRICS Chairshipin 2019 and look forward to a successful 11th BRICS Summit in Brasilia, in November.

What Women Want: a peek into the investing choices of women investors from Hyderabad and Telangana
7 hours ago