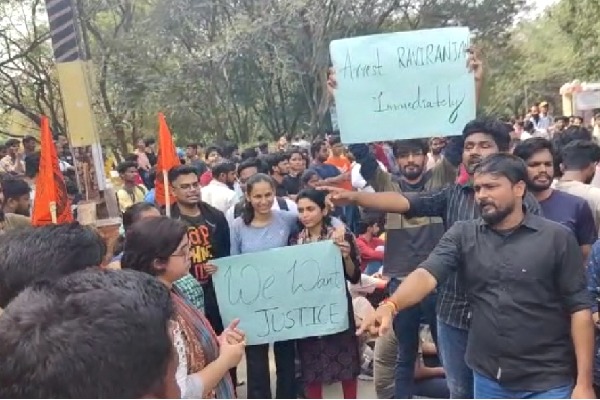 The police have arrested Ravi Ranjan, a professor in the Department of Hindi, School of Humanities. He will be produced in the court later in the day, a police officer said.

The professor allegedly called the student to his residence near the campus on Friday evening on the pretext of teaching her Hindi and tried to sexually assault her after offering alcohol.

Deeply traumatised by the sexual assault, the victim narrated the incident to her classmates. As she was unable to communicate properly in English, she used an online app for translation.

The victim, who is from Thailand and recently joined the Masters course, was rushed to the health centre of the university by other students. After the check-up, she lodged a complaint with Gachibowli police station under Cyberabad Police Commissionerate.

The Director of Foreign Exchange Programme of the central university also lodged a complaint.

The police registered a case against the professor under Indian Penal Code (IPC) section 354 (Assault or criminal force to woman with intent to outrage her modesty) and took him into custody.

The police recorded the 23-year-old victim's statement with the help of a translator.

As the word spread about the sexual assault, students gathered outside the main gate of the campus and staged a protest, demanding stringent action against the professor. They demanded that the university authorities immediately suspend him.

The students also slammed the university authorities for the delay in lodging a police complaint against the accused. They alleged that neither the Vice-Chancellor nor the Registrar met the victim.

The students belonging to various groups said they will continue the protest till the university takes action against him.


More English News
Kamal's tribute to Vishwanath: 'His art will be celebrated beyond his lifetime'
1 hour ago
SC issues notice to Centre on pleas against blocking of BBC documentary
2 hours ago

Delhi hit-and-drag case: Victim was drunk at the time of incident, sources
4 hours ago

My ruling has been continuously disregarded: RS chairman
5 hours ago

Fire breaks out in Telangana's new Secretariat building
5 hours ago

Legendary Telugu filmmaker Vishwanath is no more
6 hours ago

Telangana Budget session to begin with Governor's address
17 hours ago

Politicians need to focus on economics not politics: KTR
23 hours ago