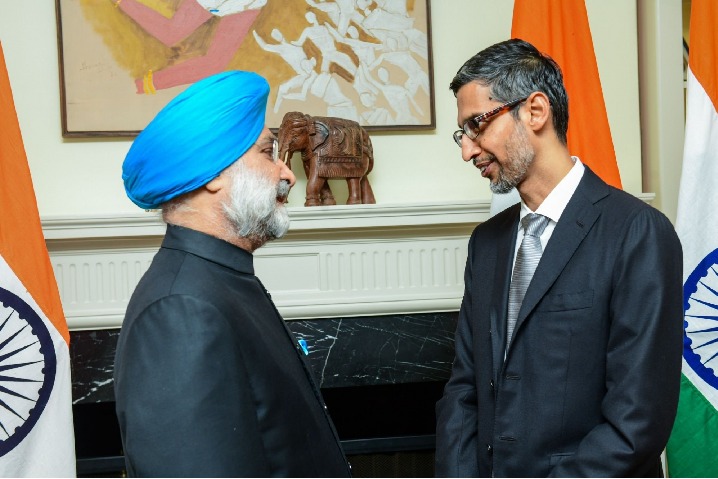 Alphabet and Google CEO Sundar Pichai has once again reiterated that India is an integral part of him and he was fortunate to grow up in a family in the country that cherished learning and knowledge.

"India is a part of me. I carry it with me wherever I go. I was fortunate to grow up in a family that cherished learning and knowledge, with parents who sacrificed a lot to make sure I had opportunities to explore my interests," Pichai said in a blog post late on Friday.

He expressed his thoughts after receiving the Padma Bhushan, India's highest civilian honour, from India's Ambassador to the US, Taranjit Singh Sandhu, in San Francisco. Pichai, who was born in Madurai and grew up in Chennai, in 2021 also said that India is deeply rooted in him and a big part of who he is.

In an earlier interview with the BBC, he said that "I'm an American citizen but India is deeply within me. So it's a big part of who I am". During his earlier visit to India, he had admitted he used to bunk classes during his engineering days at IIT Kharagpur. Pichai completed B.Tech in metallurgical engineering from IIT Kharagpur in 1993.

Pichai's mother, Lakshmi, was a stenographer and his father, Regunatha Pichai, was an electrical engineer at GEC, the British conglomerate. His father also had a manufacturing plant that produced electrical components. Pichai completed schooling in Jawahar Vidyalaya Senior Secondary School in Ashok Nagar, Chennai and completed the Class 12 from Vana Vani school at IIT Madras.

Moving to the US, he attained an MS from Stanford University in materials science and engineering and further attained an MBA from the Wharton School of the University of Pennsylvania. Pichai was selected to become the next CEO of Google on August 10, 2015. He was appointed to the Alphabet Board of Directors in 2017.

Changes in law can't be ground to modify earlier judgment, SC on plea against ED chief tenure
7 hours ago

'All wolves are joining hands but I will fight them like a lion', Jagan targets Oppn
10 hours ago

People of Kashmir gave me hearts full of love, not hand grenades: Rahul
14 hours ago