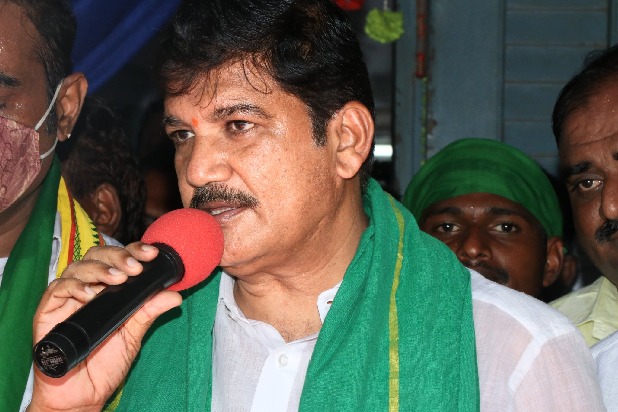 Amaravathi, Nov 29: The senior TDP leader and former MLA, Dhulipala Narendra Kumar, on Tuesday said that the Supreme Court order on Amaravathi thoroughly exposed the evil designs of the Chief Minister, Jagan Mohan Reddy, and other YSRCP leaders with regard to the farmers who donated their lands for the capital.

Talking to media persons here, Dhulipala Narendra said ultimately justice is on the side of the farmers who sacrificed their lands for Amaravathi. "In the three-and-half years rule Jagan did not donate even a single rupee for building the capital city but pushed both Amaravathi and the Polavaram projects into deep controversy," he added.

Jagan created disturbances in Amaravathi and is taking illicit pleasure in the problems of the farmers of Amaravathi, Narendra said adding that the credit of leaving a State without capital solely goes only to Jagan. When the High Court quashed the legislation on the change of capital, Jagan bought time and leisurely approached the judiciary, he said.

It is only the Jagan and Co who can misinterpret the judgment pronounced by the Supreme Court, Narendra said and stated that the apex court order has totally disappointed the YSRCP leaders who were getting ready to celebrate expecting that the order would be in their favour. Dhulipala Narendra advised the ruling party leaders to at least now start speaking the truth without misinterpreting the court orders.

The ruling party leaders should realize the fact that the Supreme Court has not stayed the High Court order that the State Government has no right to change the capital, he pointed out. The apex court also made it clear that the Government also has no right to mortgage the Amaravathi lands donated by the farmers, he said and suspected that the ruling party leaders are only trying to send some wrong signals to the people of the State.

Making it clear that the Supreme Court has never mentioned that the order is in favour of changing the capital, Narendra said that the government lawyers made it quite clear the High Court will continue to function from Amaravathi. The problems being faced by the Amaravathi farmers will certainly haunt the ruling party, he said and felt that ultimately those harassed the farmers will have to pay a heavy price.

Observing that Jagan now could not defend his own comments made when he was in Opposition, Dhulipala Narendra said that justice will ultimately protect the farmers who donated their lands for Amaravathi.