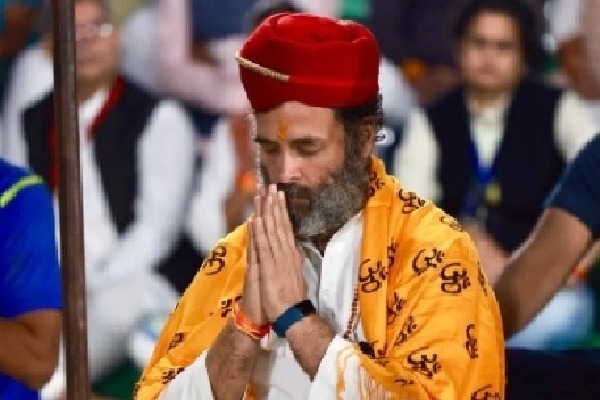 Bhopal: Congress leader Rahul Gandhi on Friday offered prayers at Omkareshwar temple in Madhya Pradesh's Khandwa district on Friday night after completing the third day's march of the Bharat Jodo Yatra that is currently passing through the central Indian state.

After that, Rahul and Priyanka, along with several party supporters, joined 'Narmada Aarti' on the bank of the river. He was seen doing 'aarti'.

On Friday, Olympic medallist boxer and Congress leader Vijender Singh also joined the yatra in which they both were seen twirling their moustaches.

Both Singh and Rahul Gandhi were also spotted clicking a selfie, which was later shared in social media with the caption 'Wakhra Swag'.

According to Congress general secretary and communication in-charge, Jairam Ramesh, Rahul Gandhi on Saturday will visit Mhow -- the birthplace of Bhimrao Ambedkar.

The former Congress president is scheduled to attend a public rally on November 28 in Indore, and on November 29 he will be addressing a 'mahasabha' in Ujjain.