Over 3,000 farmers committed suicide after Jagan came to power: Chandrababu 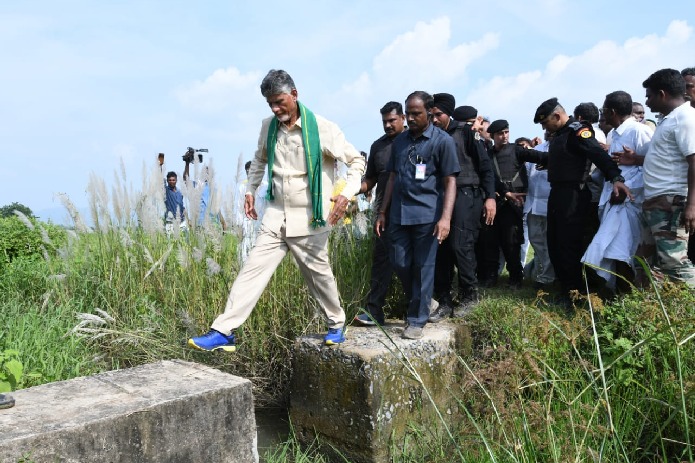 Chandrababu Naidu, who had visited the agricultural lands where large-scale crop damage has been reported following heavy rains in the Palnadu district in the State, told media persons that the farmers have suffered huge losses due to the rains that lashed the area. Stating that he had visited the cotton crop which got damaged due to the rains, Chandrababu said that the cotton and chilli farmers are the worst hit.

"Each farmer has already spent Rs 50 lakh to Rs 1 cr per acre and the Chief Minister, who is sitting in the Tadepalle palace is least bothered about them as he has no plans to come to the rescue of the affected farmers," the former chief minister stated. Why even the local MLAs are not visiting the agricultural lands when farmers are suffering from crop loss, he asked.

Can Jagan give the details on how much relief he has paid to the farmers in each village, Chandrababu asked and said that the State Government has not paid even the crop insurance premium? "Except filing false cases against the TDP leaders, the State Government is not coming to the rescue of the farmers who suffered huge crop losses due to the rains," Chandrababu said.

Cases have been filed against the Jana Sena chief, Pawan Kalyan, he said adding that he has taken the decision to extend solidarity with him only because of this reason. The farmers in the State are suffering heavily in the YSRCP rule, he stated.

Observing that the number of suicides in the Guntur district has gone up heavily in the recent past, he said that over 3,000 farmers in the State resorted to suicides after Jagan came to power. Andhra Pradesh stood in the third position in the farmers' suicides in the country and this speaks volumes about the condition of the farming community in the State, Chandrababu Naidu maintained.

The people will bury YSRCP in the 2024 Assembly elections and if the Chief Minister goes for early polls, the situation will be worse, the former chief minister felt. Chandrababu demanded that Rs 30,000 per acre be paid as compensation for the chilli farmers and Rs 50,000 per acre for cotton farmers.

He said that there has been no employment creation in the State in the past three-and-half years and Chandrababu promised to take Andhra Pradesh to the number one position in the country in development. He asked whether Pawan Kalyan has no right to visit Visakhapatnam and said that if this is the condition of the political parties one can easily imagine the condition of the common man in the State.

Observing that almost all the communities including BCs, SCs and Muslims suffered a lot in the YSRCP rule, Chandrababu asked the people to rethink whether the State needs such a Government which does not take up any welfare measures but only leads the State into complete debt. "Do we need such a Government which totally depends on funds raised through loans," Chandrababu asked.