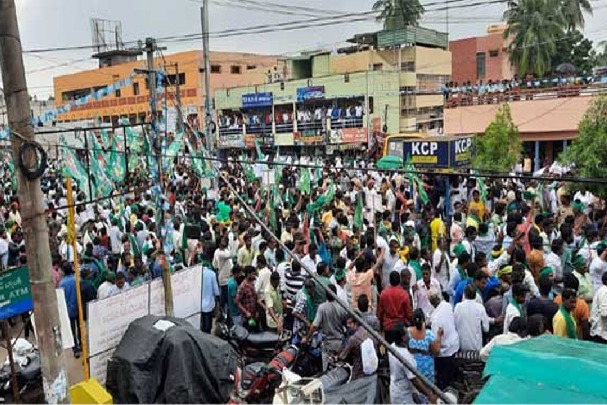 Rajamahendravaram, October 18: The YSRCP activists reportedly threw plastic water bottles towards Amaravati farmers at Azad Chowk here on Tuesday. As padayatra was passing through the city, the YSRCP workers and farmers raised slogans in support of their demands.

Condemning the incident, Andhra Pradesh TDP president Atchannaidu came down heavily on the YSRCP government. Speaking to the media here, he slammed the police officials for becoming mute spectators when the farmers are attacked with petrol and beer bottles and sticks in broad daylight.

“Why the cops are not providing protection for the walkathon taken up with the High Court’s permission,” he asked. Atchannaidu demanded that legal action should be taken against Rajahmundry MP Margani Bharat and other YSRCP leaders.

In Nidadavole on Friday, the YSRCP leaders and workers staged protest against padayatra. Terming yatra as a fake, they alleged that it was sponsored by the TDP to protect their real estate business.