Jinthaak song promo from Dhamaka ft. Ravi Teja is out 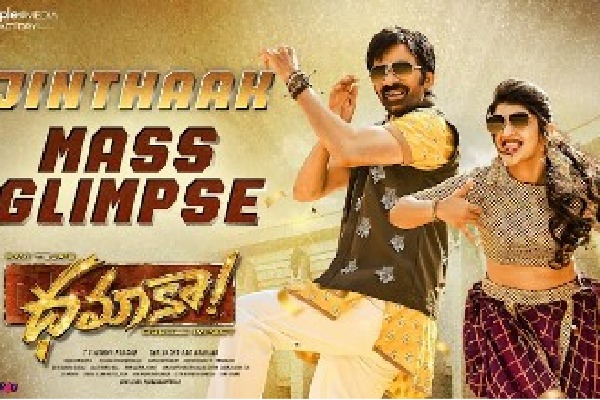 Hyderabad, August 17: The makers have released promo of Jinthaak song from action film ‘Dhamaka’ starring Ravi Teja and Srileela in lead roles. This song is crooned by Mangli and Bheems, and lyrics are penned by Kasarla Shyam. The full lyrical song will be out on August 18.

The movie is helmed by Trinadh Rao Nakkina and bankrolled by TG Vishwa Prasad, Vivek Kuchibhotla and Abhishek Agarwal under the banners of People Media Factory and Abhishek Agarwal Arts. Music for the film is scored by Bheems Ceciroleo and camera is handled by Karthik Ghattamaneni.

Dialogues are penned by Prasanna Kumar Bezwada and Nagendra is art director. It is slated for release in theatres worldwide very soon. Chirag Jani is playing antagonist character in the movie.

YSRCP govt committed to develop Amaravati as a legislative capital: Kottu
59 minutes ago