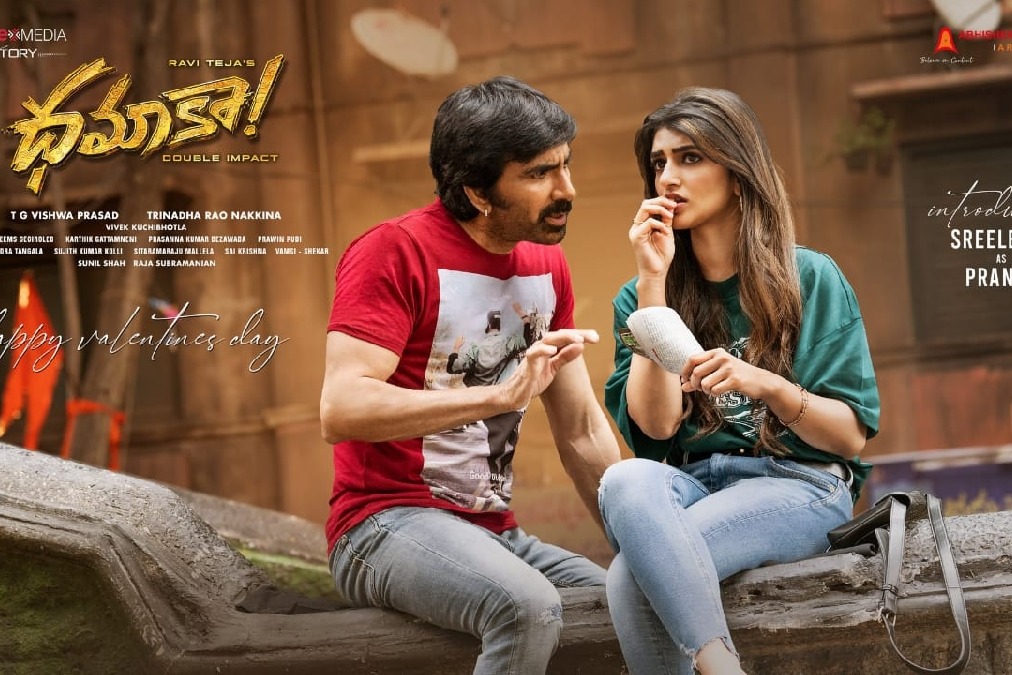 Hyderabad, Feb 14:  Actress Sreeleela's first-look poster from her upcoming movie 'Dhamaka' was revealed earlier on Monday. On the occasion of Valentine's Day, the makers unveiled the poster introducing the 'Pelli SandaD' actress as 'Pranavi'.

The poster features the lead pair Ravi Teja and Sreeleela, as they appear to be completely immersed in an interesting conversation. The makers unveiled this cute poster, as a celebration of the duo's love saga in the upcoming movie.

Ravi Teja and Sreeleela starrer 'Dhamaka' comes with an interesting tagline - 'Double Impact'. As the movie will gear up with the upcoming shooting schedules, the makers promise to update more interesting things.

The film is being mounted on a grand scale by People's Media Factory and Abhishek Aggarwal Arts. TG Vishwa Prasad is producing the movie, while Vivek Kuchibhotla is the co-producer.

'Dhamaka' is helmed by Trinadha Rao Nakkina, and will also feature some well-known actors in vital roles and top-notch technicians handling different crafts.

Prasanna Kumar Bezawada has penned the story and dialogues for the film, while Bheems Ceciroleo scores music and Karthik Ghattamaneni will handle the cinematography.

Changes in law can't be ground to modify earlier judgment, SC on plea against ED chief tenure
13 hours ago

'All wolves are joining hands but I will fight them like a lion', Jagan targets Oppn
15 hours ago