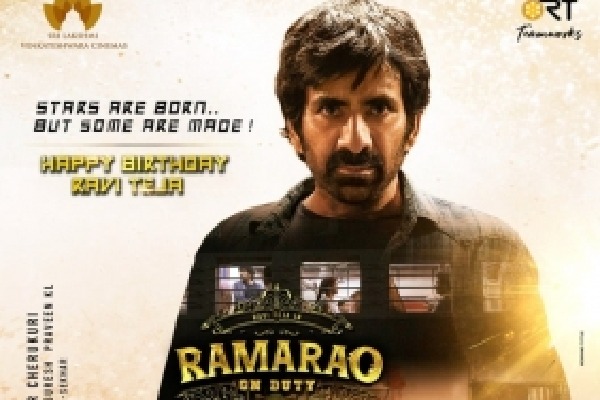 As Telugu star Ravi Teja celebrates his birthday on Wednesday, the makers of his upcoming action thriller 'Ramarao On Duty' unveiled a special poster from the movie.

The action-packed poster portrays Ravi, which also shows his various emotions. He can be seen with his wife in one image, while his family can be seen in another.

There are several other pictures featured on the special poster, as a representation of the entertainment-packed in this upcoming movie- 'Ramarao On Duty'.

Billed to be a story inspired by true incidents, 'Ramarao On Duty' will have Ravi Teja play an action-packed role with many variations. Actresses Divyansha Koushik and Rajisha Vijayan play the female lead roles in the movie, while actor Venu Thottempudi will be seen in an important role.

It has been reported that the makers of 'Ramarao On Duty' are in the final leg of shooting, as they will soon begin the shoot for a song from today in Ramoji Film City.

Being directed by debutant Sarath Mandava under Sudhakar Cherukuri's SLV Cinemas LLP and RT Teamworks, 'Ramarao On Duty' is gearing up for its theatrical release soon.

Music for the flick is by Sam CS, while Sathyan Sooryan ISC cranks the camera. Praveen KL is the editor.

More English News
Why not the Nehru surname? Modi targets Gandhi family and Cong for 'misusing Art 356'
5 minutes ago