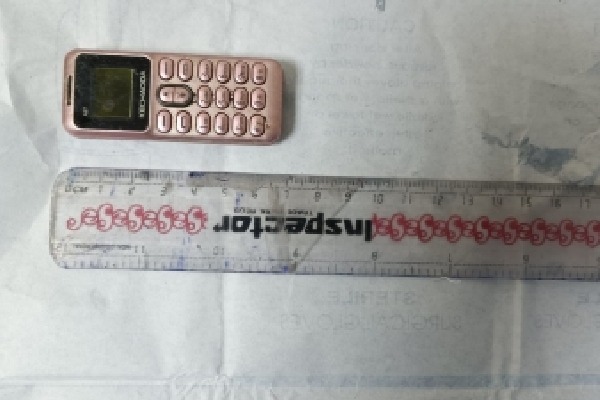 New Delhi, Jan 19:  Doctors at Delhi's GB Pant Hospital have successfully removed a mobile phone from the stomach of a Tihar inmate who had swallowed it in a bid to hide it from the authorities during a surprise check.

Director General (Prison), Sandeep Goel, told IANS that the mobile phone was removed via endoscopy and the prisoner has been sent back to the jail.

The incident took place on January 5 when the inmate lodged at Jail No. 1 swallowed a mobile phone to hide it from the staff while he was being searched.

The inmate was immediately taken to the Deen Dayal Upadhyay Hospital in the city from where he was referred to the GB Pant Hospital.

Doctors at the GB Pant Hospital, who performed the endoscopy, told IANS that it was not the first time that they performed the procedure of removing a foreign object from a person's stomach.

"It was probably the tenth time we were doing such a procedure," said Siddharth Srivastava from the Department of Gastroenterology, GB Pant Hospital.

He further said that in 2021, the doctors at the hospital had published a case study in a gastro journal based on such a procedure.

"He was admitted to the hospital for over a week and was under constant medical observation," the DG Prison added.

The Tihar Jail authorities have been strengthening the security arrangements in the prison following the major backlash they received over jail officials being caught providing facilities to the inmates, including cellphones.

Over 40 officials at Tihar Jail have been booked by various law enforcement agencies during the past six months for extending benefits to the prisoners in one way or the other.

Goel, in an earlier interview with IANS, had said that the Tihar Jail will soon have two X-ray based human body scanners that can prevent infiltration of illegal articles and gadgets inside the prison premises.

Goyal said they are installing three new towers inside the jail premises that would confine the mobile signals emanating from the prison.

"All these measures are steps in the right direction and can prove beneficial in the future," he added.