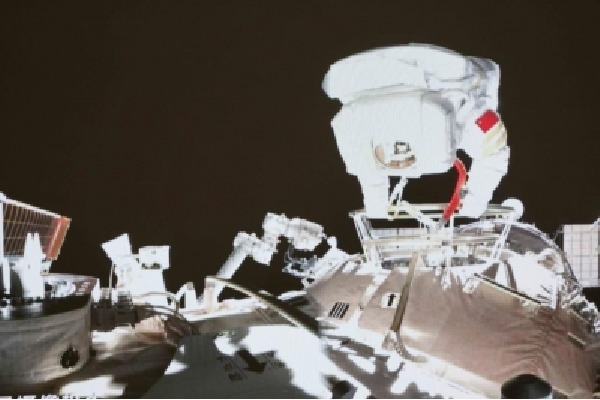 Wang Yaping has become the first Chinese female astronaut to conduct spacewalk outside the Tianhe space station module, according to the China Manned Space Agency (CMSA). Yaping along with Zhai Zhigang, and Ye Guangfu, which form the Shenzhou 13 crew, had launched to the Chinese space station on October 15 to kick off a six-month expedition to the orbital lab.

The spacewalk marks the first of the Shenzhou-13 mission, and the third of its kind during the country's space station building period, the CMSA said.

It has verified the performance of China's home-developed spacesuit, the ability of the astronauts to work with the robotic arm and the reliability and safety of the supporting equipment.

Together, Yaping and Zhigang first installed foot stoppers and a working platform to the robotic arm before they worked together to install a suspension device and transfer connectors to the robotic arm. The CMSA noted that the robotic arm played an important supporting role in the process, the report said.

Yaping, shortly after stepping out the cabin, waved back to Earth, and said she felt great, according video by the Beijing Aerospace Flight Control Center that went viral on Chinese social media on Sunday night.

The Shenzhou-13 crew will carry out another one or two spacewalks. The major objectives include installing an adaptor to allow Tianhe's large arm to connect to another, smaller arm that will be on a future module.

Just two of 12 Chinese astronauts to have flown to space, so far, have been women. Yaping is the second Chinese woman to be in space in 2013 on Shenzhou 10, after Liu Yang on Shenzhou 9 in 2012.

Yaping visited Tiangong 1, a space lab which was designed as a test bed for the much larger Tianhe module. During the mission, the 41-year-old taikonaut (a Chinese astronaut) also delivered a lecture to school children from orbit.

Wang is also known to have been in training earlier this year for space station missions.

Wang was born in 1980 in Yantai, East China's Shandong Province. She has been given the honorary title of "Hero Astronaut," according to the CMSA website.

Shenzhou 13 will be the last mission this year to build the space station.

When completed, the T-shaped Tiangong ("Heavenly Palace") space station will be China's first multi-module space station. In addition to hosting Chinese crews and research, China plans to invite international partners to visit and work aboard the orbiting outpost.

In all, the Tiangong will have a mass of about 100 tonnes, about a quarter of the size of the International Space Station, which was built by a coalition of 16 countries, the South China Morning Post reported.

The Tiangong is likely to be the only space station operating in near-Earth orbit by the end of the decade, because the 15-year-old ISS is ageing, especially its Russian segment, the Zvezda service module, it added.